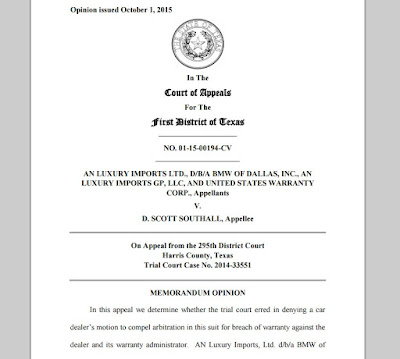 In December 2013, Southall purchased a Porsche Cayman from BMW
Dallas. In connection with the purchase, Southall and BMW Dallas executed a
retail purchase agreement, an arbitration agreement, and a used vehicle limited
mechanical warranty. The parties signed these agreements contemporaneously
with each other. The arbitration agreement provides:
[Southall] and [BMW Dallas] agree that arbitration will be the sole method
of resolving any claim, dispute, or controversy . . . that either Party has
arising from Customer[]/Dealership Dealings. Such [c]laims include . . . (2)
[c]laims relating to any . . . warranties . . . and (5) [c]laims arising out of or
relating to . . . this [a]greement and/or any and all documents executed,
presented or negotiated during Customer[]/Dealership Dealings, or any
resulting transaction, service, or relationship, including that with the
Dealership, or any relationship with third parties who do not sign this
[a]greement that arises out of the Customer[]/Dealership Dealings.
The purchase agreement incorporates the arbitration agreement by reference:
“If [the purchaser] ha[s] executed an Arbitration Agreement in conjunction with
this Agreement such Arbitration Agreement shall be incorporated herein by
3
reference and made a part of this Agreement.” The arbitration agreement provides
that if there is any conflict between the purchase agreement and the arbitration
agreement, the purchase agreement governs.
The purchase agreement also contains a forum selection clause. It provides
that the “sole and exclusive venue for any dispute or litigation arising under or
concerning this [purchase agreement] shall be in the courts located in and for the
county in which [BMW Dallas] is located, and the parties irrevocably consent to
the jurisdiction of said court. Any and all arbitration proceedings shall also take
place in the county where the dealer is located, unless agreed otherwise by the
parties.”
BMW Dallas issued the warranty and “appointed United States Warranty
Corporation as the authorized Administrator for th[e] . . . Warranty.” The warranty
does not refer to the arbitration agreement or the purchase agreement.
The Porsche engine failed within two months of the sale. Southall filed a
claim with U.S. Warranty for the damage. U.S. Warranty denied the claim,
determining that Southall had caused the damage by driving the Porsche during
“racing or other competition.” Southall’s mechanic disagrees; he concluded that
the Porsche already had exceeded its maximum allowable RPM before Southall
bought it.
4
Southall sued for breach of contract, breach of warranty, negligence, unfair
settlement practices under the Texas Insurance Code, fraud by nondisclosure,
negligent misrepresentation, violations of the Texas Deceptive Trade Practices Act,
and the federal Magnuson-Moss Warranty Act. The sellers moved to compel
arbitration; the trial court denied the motion.

Because an enforceable arbitration agreement governs the claims against the
sellers, we reverse the order of the trial court and remand the case for further
proceedings consistent with this opinion. 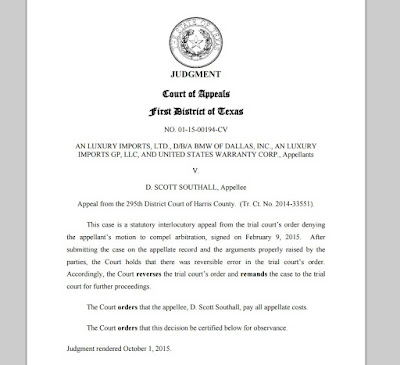