Out the Courthouse Door and Off to Arbitration You Go, Dasher -- By Yourself! - Edwards v Doordash Inc. (5th Cir 2018)

U.S. Fifth Circuit Court of Appeals affirms dismissal of FLSA class action based on written agreement between company and food delivery drivers (Dashers) that designates them as independent contractors and contains arbitrability delegation clause within the arbitration agreement. Dewey Edwards v Doordash, Inc. (5th Cir Apr. 25, 2018) (affirming district court's order to compel arbitration and dismissing case without reaching arbitrability and class certification issues based on arbitrability delegation clause. Challenge to arbitrability to be decided by arbitrator, based on the arb agreement's incorporation of AAA rules). 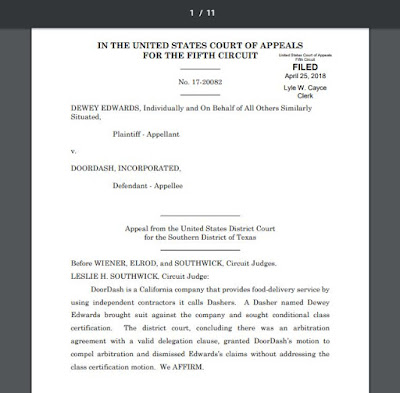 Edwards filed suit against DoorDash in the United States District Court for the Southern District of Texas, alleging Fair Labor Standards Act (“FLSA”) violations. He also moved for conditional certification of a class of similarly situated individuals nationwide on the same day.

In response, DoorDash filed both an emergency motion to stay the conditional certification and a motion to compel individual arbitration and dismiss the suit. The magistrate judge who was referred the case partially granted DoorDash’s motion, stating the arbitration issue would be considered first and the certification issue later. Edwards objected, but his objection was overruled.

After an evidentiary hearing and supplemental briefing, the magistrate judge issued a report and recommendation that the motion to dismiss should be granted and Edwards should be compelled to arbitrate his claims. The district court agreed and the Fifth Circuit affirmed.

(full text of opinion in pdf)

A court makes two determinations when deciding a motion to enforce an arbitration agreement. Klein v. Nabors Drilling USA L.P., 710 F.3d 234, 236 (5th Cir. 2013). First, the court asks whether there is a valid agreement to arbitrate and, second, whether the current dispute falls within the scope of a valid agreement. Id. If the party seeking arbitration argues that there is a delegation clause, the court performs the first step — “an analysis of contract formation” — “[b]ut the only question, after finding that there is in fact a valid agreement, is whether the purported delegation clause is in fact a delegation clause.” Kubala v. Supreme Prod. Servs., Inc., 830 F.3d 199, 202 (5th Cir. 2016). “If there is a delegation clause, the motion to compel arbitration should be granted in almost all cases.” Id. In deciding whether the agreement to arbitrate exists, federal courts do not consider general challenges to the validity of the entire contract. Buckeye Check Cashing, Inc. v. Cardegna, 546 U.S. 440, 449 (2006). An arbitration agreement is severable from the underlying contract under Section Two of the Federal Arbitration Act. Rent-A-Center, W., Inc. v. Jackson, 561 U.S. 63, 70 (2010). As a result, a “party’s challenge . . . to the contract as a whole . . . does not prevent a court from enforcing a specific agreement to arbitrate.” Id.

Following Buckeye and Rent-A-Center, we must distinguish arguments regarding the validity of the arbitration agreement from arguments regarding the validity of a contract as a whole. Lefoldt ex rel. Natchez Reg’l Med. Ctr. Liquidation Tr. v. Horne, L.L.P., 853 F.3d 804, 814 (5th Cir. 2017), as revised (Apr. 12, 2017). Once the court determines there is a valid arbitration agreement, any remaining arguments that target the validity of the contract as a whole are questions for the arbitrator. Id. at 815. Importantly, arguments attacking an agreement’s validity are to be distinguished from arguments that a contract was never formed. Id. at 810. We are permitted to consider arguments about contract formation. Id. 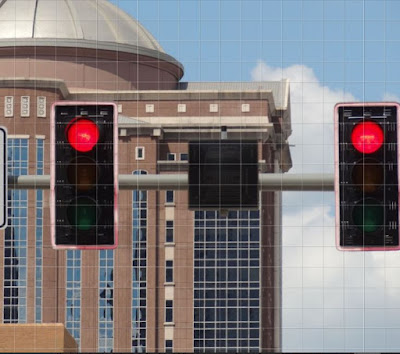 ARBITRABILITY TO BE DECIDED BY THE ARBITRATOR,
BASED ON INCORPORATION OF AAA RULES

Edwards also argues that the agreement is unconscionable. Unconscionability is not a contract formation issue under California law. A California intermediate court held that an argument that an entire agreement is unconscionable is a “contention [that] must be presented to the arbitrator.” Higgins v. Superior Court, 45 Cal. Rptr. 3d 293, 301 (Cal. Ct. App. 2006), as modified (July 10, 2006). If the question of an underlying agreement’s validity is for the arbitrator, we can infer that California courts consider the question to relate to the contract’s validity but not its formation. Because Edwards’s unconscionability arguments do not relate to whether an agreement to arbitrate was formed, we do not consider them during the first step of the Kubala analysis. We now turn to step two of the Kubula framework: the question of whether there is an enforceable delegation clause. DoorDash identifies a delegation clause through the incorporation of the American Arbitration Association (“AAA”) rules in the arbitration agreement.

Edwards concedes the arbitration provision incorporates a delegation clause. Under Rule 7 of the AAA rules, “[t]he arbitrator shall have the power to rule on his or her own jurisdiction, including any objections with respect to the existence, scope, or validity of the arbitration agreement or to the arbitrability of any claim or counterclaim.” We have previously held “that express incorporation of the same AAA Rules constitutes clear and unmistakable evidence that the parties agreed to arbitrate arbitrability.” Crawford Prof’l Drugs, Inc. v. CVS Caremark Corp., 748 F.3d 249, 262–63 (5th Cir. 2014) (citing Petrofac, Inc. v. DynMcDermott Petroleum Operations Co., 687 F.3d 671, 675 (5th Cir. 2012)).

DEWEY EDWARDS, Individually and On Behalf of All Others Similarly Situated, Plaintiff-Appellant,
v.
DOORDASH, INCORPORATED, Defendant-Appellee.

Appeal from the United States District Court for the Southern District of Texas.

DoorDash is a California company that provides food-delivery service by using independent contractors it calls Dashers.

A Dasher named Dewey Edwards brought suit against the company and sought conditional class certification. The district court, concluding there was an arbitration agreement with a valid delegation clause, granted DoorDash's motion to compel arbitration and dismissed Edwards's claims without addressing the class certification motion.

DoorDash customers in over two hundred cities can use a mobile application to order food from certain restaurants. A Dasher will deliver the order to the customer. DoorDash requires Dashers to sign an Independent Contractor Agreement ("ICA"). The ICA that Edwards signed contains this arbitration clause:

Edwards's ICA also includes this choice-of-law provision: "This Agreement shall be governed by and construed in accordance with the laws of the State of California without reference to the conflict-of-laws principles thereunder."

Edwards filed suit against DoorDash in the United States District Court for the Southern District of Texas, alleging Fair Labor Standards Act ("FLSA") violations. He also moved for conditional certification of a class of similarly situated individuals nationwide on the same day. In response, DoorDash filed both an emergency motion to stay the conditional certification and a motion to compel individual arbitration and dismiss the suit. The magistrate judge who was referred the case partially granted DoorDash's motion, stating the arbitration issue would be considered first and the certification issue later. Edwards objected, but his objection was overruled.

After an evidentiary hearing and supplemental briefing, the magistrate judge issued a report and recommendation that the motion to dismiss should be granted and Edwards should be compelled to arbitrate his claims. The district court agreed. Edwards timely appealed.

I. Whether this court has appellate jurisdiction

Edwards categorized his appeal as interlocutory even though the suit was dismissed in order for arbitration to proceed. Interlocutory appeals of orders compelling arbitration are prohibited. 9 U.S.C. § 16(b). What is permitted, though, is an appeal of a final decision regarding arbitration. Id. § 16(a)(3). A final decision is one that "ends the litigation on the merits and leaves nothing more for the court to do but execute the judgment." Green Tree Servicing, L.L.C. v. Charles, 872 F.3d 637, 639 (5th Cir. 2017) (quoting Green Tree Fin. Corp.-Ala. v. Randolph, 531 U.S. 79, 86 (2000)).

Here, the decision is final as to Edwards. All that remained for his claim was for the court to enter a final judgment. Although there were three other plaintiffs whose claims had not yet been dismissed, the final judgment rule applies to Edwards. We have exercised jurisdiction over an appeal when the order appealed from disposed of all of the appellants' claims, even though it did not resolve yet another plaintiff's claims. Barrett v. Atl. Richfield Co., 95 F.3d 375, 379 (5th Cir. 1996). This is not an interlocutory appeal as Edwards argues, and instead this court has jurisdiction under Section 16(a)(3).

II. Whether the district court erred in compelling arbitration before considering the class certification

Edwards insists the district court erred in ruling on DoorDash's motion to dismiss and compel arbitration before it ruled on Edwards's motion to certify a class. The magistrate judge concluded that arbitrability was a threshold question and therefore ruled on that without considering the motion for conditional certification. DoorDash characterizes the decision as one relating to docket management and urges this court to review for an abuse of discretion. See Woodson v. Surgitek, Inc., 57 F.3d 1406, 1417 (5th Cir. 1995). Edwards, on the other hand, urges us to review the decision de novo. Because we would affirm under either standard, we need not discuss the proper standard of review.

The magistrate judge relied on a recent opinion to support the decision to rule on arbitrability without ruling on the conditional class certification. See Reyna v. Int'l Bank of Commerce, 839 F.3d 373, 376 (5th Cir. 2016). There we held that arbitrability claims should be resolved at the outset, even before considering conditional class certification. See id. We rejected the plaintiff's contention that "[i]n collective action suits brought under the FLSA, courts rule on first-stage conditional certification and notice beforeruling on the validity and enforceability of any purported arbitration agreement." Id. We distinguished Reyna from other cases in which district courts had certified a collective action before determining the arbitrability of the claims. Id. Those cases involved numerous factual distinctions, including the presence of additional opt-in plaintiffs. Id. at 376-77. Reyna was different because it involved "a defendant who promptly moved to compel the sole plaintiff to arbitrate his claim, pursuant to an arbitration agreement that undisputedly exist[ed]." Id. at 377.

The rationale for the holding in Reyna, though, was not limited to these factual differences. We also stated that arbitrability is a threshold question, as a contrary holding "would present a justiciability issue: a court could conditionally certify a collective action solely on the basis of a claim that the plaintiff was bound to arbitrate and was therefore barred from bringing it in court in the first place." Id. The court also stated that determining whether claims had to be arbitrated "prior to conditional certification more closely aligns with the `national policy favoring arbitration' embodied by the FAA." Id. at 378 (quoting AT&T Mobility LLC v. Concepcion, 563 U.S. 333, 346 (2011)).

Edwards's arguments against applying Reyna are limited to identifying factual differences. He says that his case has more than one named plaintiff, that no four-step grievance procedure exists, and that the validity of the arbitration agreement is disputed. What Edwards fails to do, however, is explain why those differences compel a different result. As in Reyna, we agree that "whether the named plaintiffs must arbitrate their claims should be decided well before the nationwide notification issue is reached." Id. at 377 (quoting Cater v. Countrywide Credit Indus., Inc., 189 F. Supp. 2d 606, 618 (N.D. Tex. 2002)). We continue to hold that arbitrability is a "threshold question" to be determined "at the outset," a holding consistent with the "national policy favoring arbitration." Id. at 377-78 (citations omitted).

III. Whether the district court erred in enforcing the arbitration agreement